The Central NH Model T Club was formed 35 years ago and is known as a “Driving Club” and try to schedule at least one “tour” every month during good weather. Of course we push to get out early in the spring and some of us keep our cars on the road until snow flies (or later).

On “tour days” we all meet at a pre-arranged location usually in the morning with our drivable cars, we then head out as a group most often on the “road less traveled” for a leisurely drive thru the beautiful back roads of New Hampshire, occasionally passing into Vermont, Massachusetts and Maine. Tour distances range from 30-40 miles to as much as 110, a sometimes strenuous work out for our 90ish plus year old cars

Check out our “Tour List” page for recently completed tours an upcoming plans.

For most people, this might sound impossible, but for us it is nothing special.  Parts are moslty available, and with no computers, electronics or fancy systems, they are remarkably easy to keep on the road.

Over 23 Million Model T Ford cars were build between 1908 and 1927 here in the United States, They were also build overseas.. 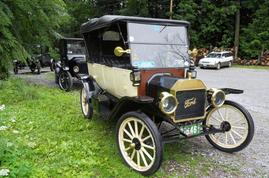